Season of the Moose | Haines AK 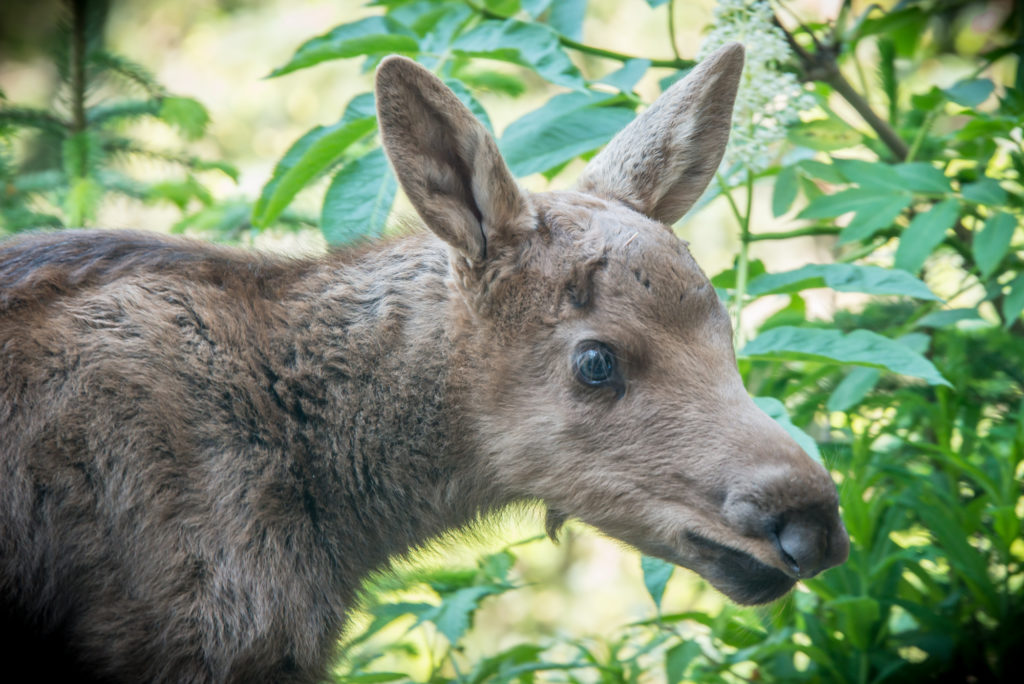 This is a short follow up to my previous blog post “Day of the Moose.” Questions have been raised which encourage me to continue the story, and relate a happy ending over the course of the season.

To briefly recount, in May of 2015 a three-day old moose calf wandered into our yard, plaintively bleating in distress, seemingly lost and in need of its mother. Eleven hours passed as we watched our small friend conserve its energy before mother appeared to the rescue.

And what precipitated this event? As near as we can discern, cow and calf were separated by a dog. Our nearest neighbors were absent but had loaned their house to some friends of friends who were visiting the area. They had a dog, and we heard a lot of barking from that direction, and shortly thereafter the calf wandered into our yard. Likely mom went in one direction, and unior went in another direction. This is a rather common way in which moose may become separated.

And why was mom away for so long? I have come to find in my research that it is not uncommon for ungulate (large hoofed mammals) families to wander off independently of each other. Her absence for what seemed to be a very extended period was causing us increasing concern. As described in the previous blog, Junior’s strength seemed to be diminishing. His breath increasingly short and rapid. I was intrigued and delighted to observe that when Mom appeared, the calf stood and immediately went to nurse, and seemed to instantaneously regain his strength. (I had been advised by our local experts to NOT give the calf any water; mother’s milk and the nutrition it offered was the calf’s only option.)

So it is not uncommon for cows and calf’s to separate. Indeed and in fact two days later we heard Junior in the woods below our house calling plaintively once again, suggesting it was lost and looking for some rescue from Mom. (We did not go chasing after the family to observe, deciding it best to let nature take its course, to coin a phrase.) 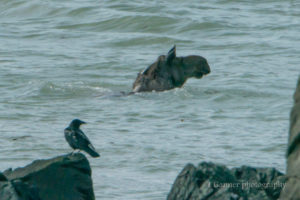 And then two days later, my wife informed me that the Mom was once again down below our house in the woods near our rocky beach, and appeared to be by herself. This time I did wander down as she headed toward the shoreline, and watched her take to the water and swim along the shore to emerge a hundred-or-so yards up the shore on our neighbor’s property. I am starting to think this inattentive cow could use a class in good-parenting behaviors.

Happy to say it seems that all is well that ends well. From time to time through the course of the season, Mom and Junior would appear and wander through our yard to garden and graze on the goodies at hand. (Happy to share that moose apparently do not like potatoes and spared our tater plot. Mom also inspected our pole beans and left them alone. The rest of our garden is behind fences or elevated on a high deck). 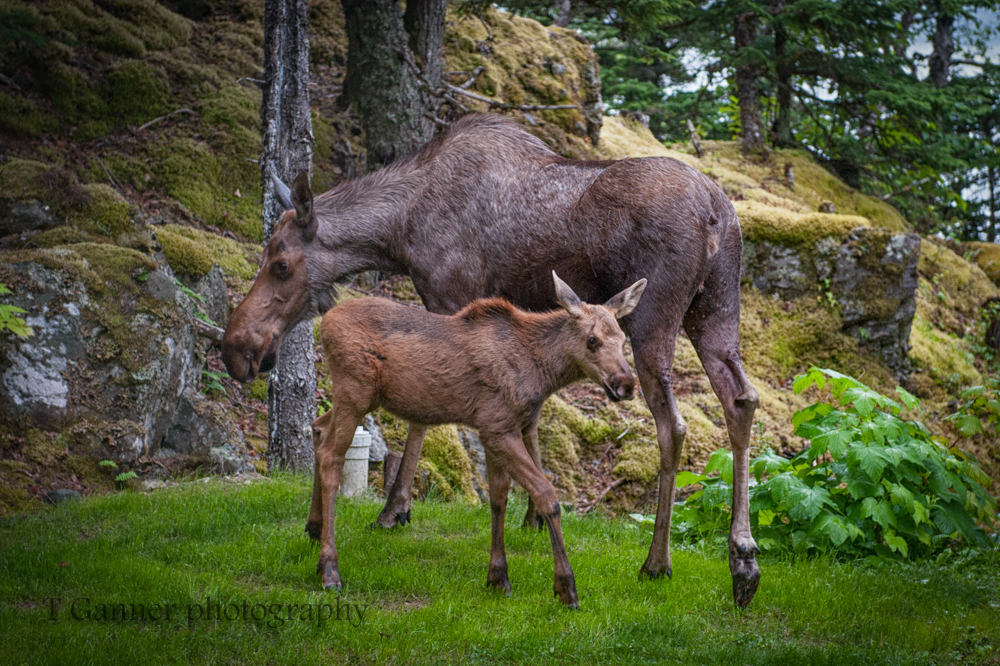 An interesting article offered by the State of Alaska Department of Fish and Game on the unlikelihood of moose calves being orphaned came to me in the wake of our little adventure. Apparently this is not an uncommon occurrence among ungulates. READ THE ARTICLE.

For a full resolution rendition of the original blog, including a five-minute video clip of our little charge and his reunion with Mom, please visit my Smug Mug site for Day of the Moose

The previous blogs were tales of an occurrence two years ago. This morning as I worked at my computer, Mama moose walked in front of my window, which of course redirected my attention. My camera was at hand, and I stepped out and was able to get this shot. I recognize her by the scar she carries on her right flank (not visible in the photo.) 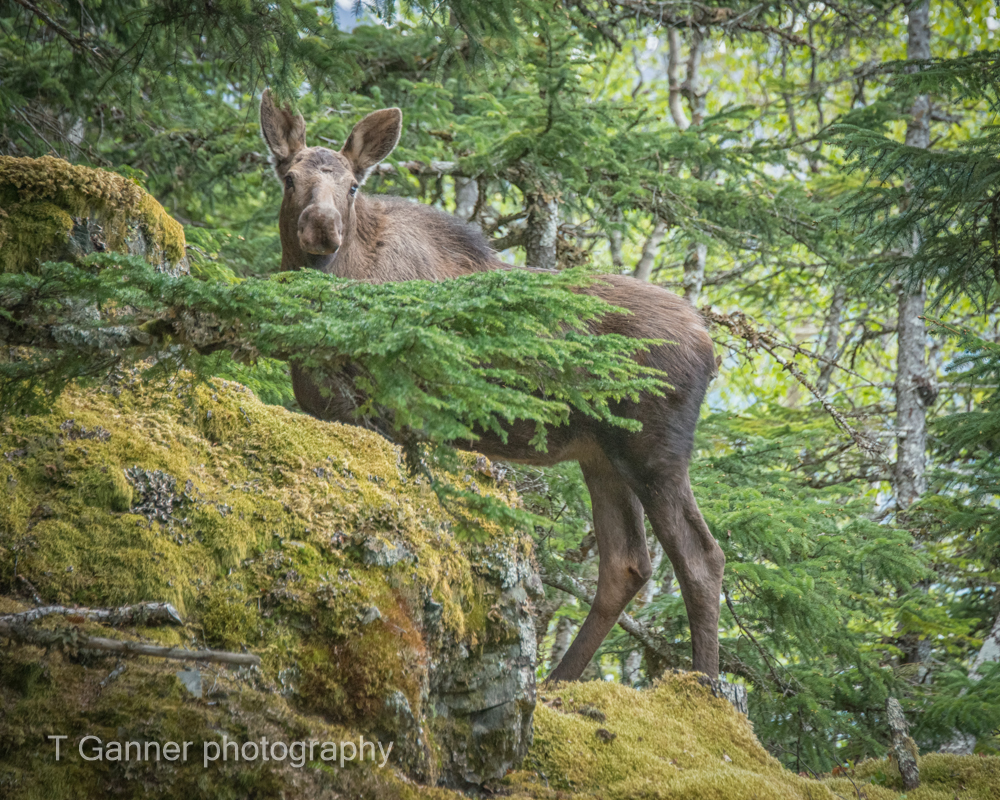 Mama moose on a walk through

It appeared that Mama had no calf this year, though she came through our yard last year with two young ones by her side. 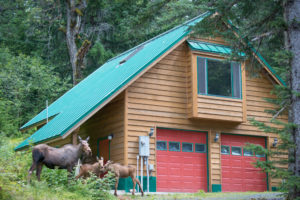 I was surprised and delighted when I walked out onto the upper deck to watch her in the forest to see a second moose. A very young moose, who I can only assume is one of the two calves she had last year. Perhaps there was a third moose in the forest who was beyond my vision. She seems to be doing better about keeping her kin close.  Things to stay tuned for! 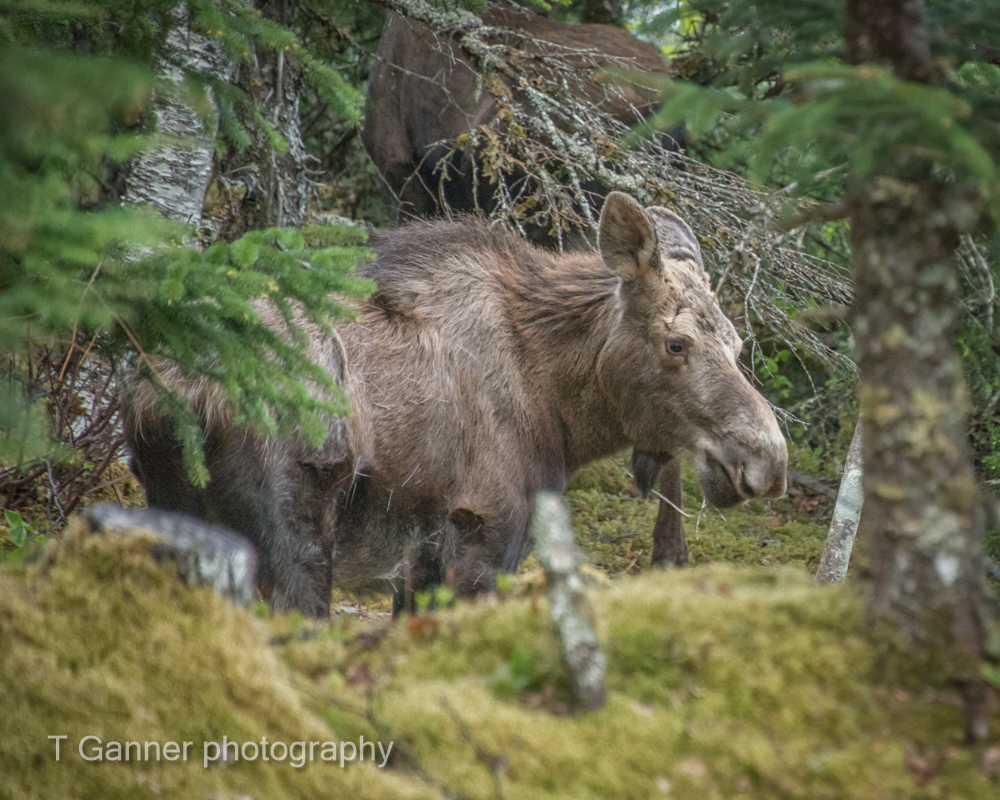 One of mama moose’s calves. Mom is in the background. Is there another young moose afoot?