The Black Oystercatcher is a colorful, amusing, and intriguing fowl that inhabits and nests on our rocky shores. I have been really looking forward to writing a blog on surf scoters, but yesterday took a turn and presented an opportunity that necessitates a slight sublimation of purpose and a brief delay to the original intention.

The Black Oystercatcher (Haematopus bachmani; The genus name Haematopus is Greek for “blood foot”, and refers to the oystercatcher’s pink legs) is a variety of oystercatcher that inhabits the west coast of North America on out to the Aleutian Islands. I recently had the privilege to journey back to the Eldred Rock Lighthouse with the purpose of photographically documenting the nesting habitat of the Black Oystercatcher for a local conservation agency. Although the species is not considered threatened, its global population size is estimated between 8,900–11,000 individuals. The black oystercatcher is a species of high conservation concern throughout its range (U.S., Canadian, Alaskan, and Northern & Southern Pacific Shorebird Conservation Plans), a keystone indicator species along the north Pacific shoreline, a management indicator species in the Chugach National Forest, and a U.S. Fish & Wildlife Service focal species for priority conservation action. 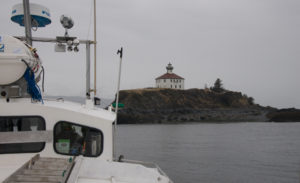 The trip to Eldred Rock takes us 20 miles south of Haines through the top of the Lynn Canal. The lighthouse located on Eldred Rock is Alaska’s oldest original lighthouse and was manned until 1973, at which time it became automated. Remaining occupants include the oystercatchers and otters, infrequently visited by travelers including kayakers and sea lions. On the day we visited, I counted nine eagles on the north shore of the island, several groups of sea lions, cormorants, mergansers, heron, and LOTS of oystercatchers. 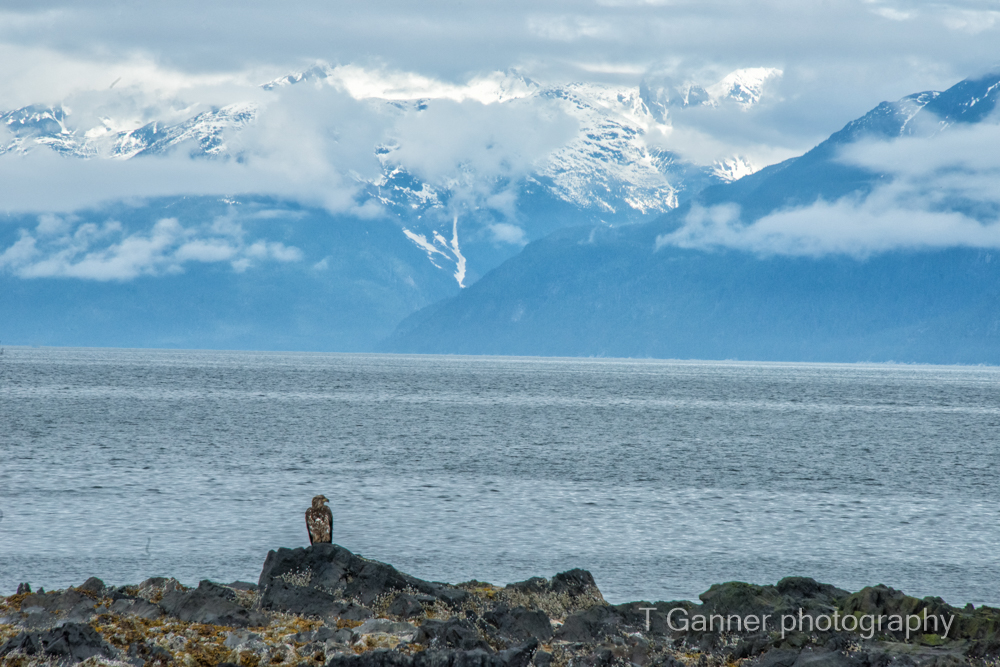 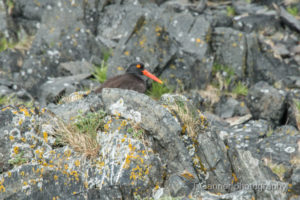 I had the challenging pleasure of spending the next few hours combing the “beach” in search of nests so that we might photographically document the habitat used for nesting. I started off looking for something resembling a nest above the high tide line in the areas of the island which seemed to have the most oystercatchers. They were certainly all flustered as I slowly wandered around, though I saw none of the “broken-wing” behavior I have previously experienced in Glacier Bay that is designed to lead a “predator” away from a nest. There appeared to be quite a few of the birds “setting” but it was unclear if any had actually set 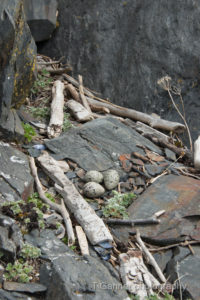 eggs yet. We might be a week early. Regardless, I was having fun roaming and watching and shooting merrily with my camera. Even if we could not locate a nest, it would be easy to document the habitat that would in short time be the home of our friend’s nests. We got lucky toward the end of the day. I came to realize that I suck at finding the nests, because they really do not look like nests. In fact I had passed within a few yards of one without realizing how close I had come. The eggs on the island are set inside narrow crevices in the weathered slates and look quite like other rocks resting in the hollow. In total, we found two “nests;” one nest had three eggs, the other contained a solitary egg. For all the eagles and ravens on the island, I have to wonder about the mortality of the eggs laid. Everyone has to eat, and I suspect nature has taught us there is safety in numbers. 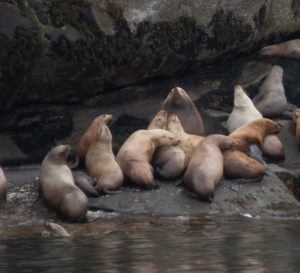 Sea lions at the rookery. A bull and his harem.

Back on board our trusty vessel, the Taz we headed north for home, satisfied with the day’s work accomplished. The delights were far from done, as we were treated to a sighting of several humpback whales and a brief stop to a sea lion rookery, where I saw more sea lions than I have ever seen at that location. Overall a great day, and I offer a brief video to share a few of the special moments. 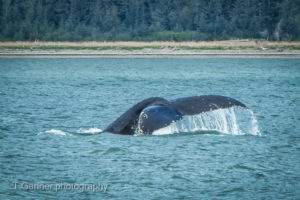 A humpback’s tail gives a tale to tell

And below a little video offering of sights and sounds of oystercatchers, sea lions, and the Taz. Not particularly high-quality video by any means, hand holding, and standing on a rocking boat, but it are what it is, and is offered for amusement value only!