Raven shares wisdom with Bear and why I am writing blogs again. 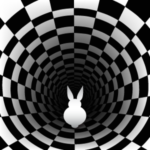 It is time to poke my head out of the rabbit hole and let you know why I am writing blogs again before I share the story of “Raven shares wisdom with Bear.”

I spend a lot of time in various rabbit holes.  Where they go and how I got into them varies with time and circumstance (and of course space). I want to surface for a spell and share how I got into a few of these and where I plan to go, which may have only moderate bearing on where I will end up.

What appears on the surface as a hole does indeed end up being a burrow, which can lead in various directions, connect up with other burrows, and surface as seemingly distinct holes. 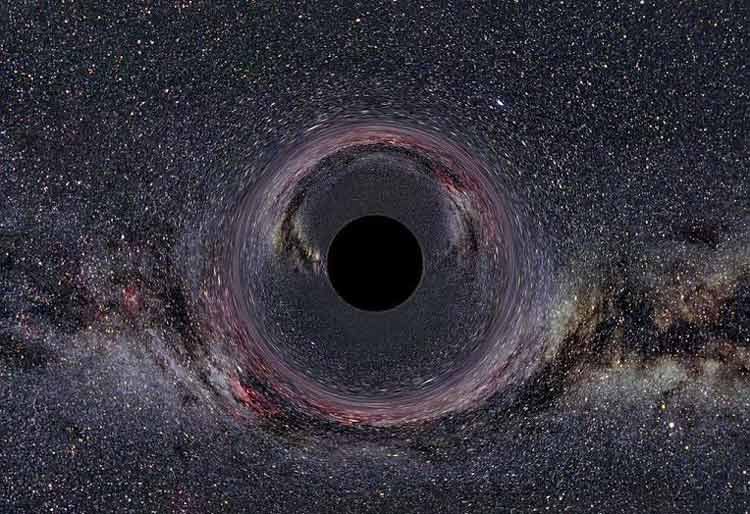 Some holes are deeper than others, and who knows where you will pop out again?

I started writing blogs before I had ever heard of the word. Back then I called them travelogues. Some would call them a journal.  I like to share, and my original website www.majorproduction.net (still up, even if a backwater) was the perfect stage for Roman’s (nom du web) Roamings. I have always enjoyed writing, and traveling, and the web seemed like the perfect place to share tales of travels through a freely published diary available to all. It amazes me that at times, decades after the fact, people I have never met will still contact me to ask about places I have visited based on their finding one of my journals through some search engine. It is profoundly gratifying.

Along the way, as options on the internet expanded, I came to feel an agreement with the adage that a picture is worth a thousand words.  That and perhaps I was getting lazy. For several years, I relied increasingly on Google’s PiCasa photo album program to share photos of the adventures, and perhaps include some captions and quips. Along the way, after my retirement from teaching, I became increasingly invested in photography, which lent itself to allowing images to speak for themselves, by and large. 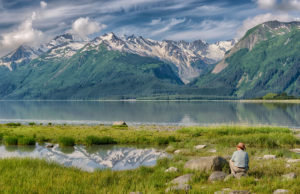 I have always enjoyed looking at and into the world around me. While I tend to be an analytical sort (from the root anal, and let’s not go too far down THAT hole!) there is an aesthetic side of me that rises from the depth of some burrow. As I have grown, matured, evolved (?), and otherwise expanded my senses and sensibilities, that aesthetic side has continued to emerge. So, along the way, I come to ask myself, and my photo tour guests, as photographers, are we artists? An artist “makes” art. A photographer “takes” a picture. To offer some arguments, I suggest a “photographer” can choose to “take” a picture or “make” a photograph. It is all a matter of care and consideration and choice about what you want for the end-product. I will also argue that a photographer may be faced with a greater challenge than an artist such as a painter. A painter can “create” whatever image pleases them, giving their work a sense of light and composition that reflects their vision. The photographer is constrained to working with and around available conditions of light and composition, and is faced with the ultimate reality of what appears through the aperture of their lens, which cannot be accurately recorded by the camera in the same manner the eye sees and the mind perceives.

Back to the point, I have decided to resume my writing. I feel a need to move beyond acquisition into creation. My creative juices need to flow. This is likely an attempt to once again marry the analytic and the aesthetic, through the discipline of taking the time to dig out what is in my head and create something either pleasing, amusing, instructive, or whatever. Take what’s in here and put it out there! Occasionally, I find myself having a thought that appears worthy of keeping. As often as not, having written down some pearl, I return to wonder what it was I was thinking. I know I am not alone. Thoughts and recording those thoughts become a bit like photography. Have enough thoughts and a few are bound to turn out well.

And while it is true that a picture is worth a thousand words, sometimes a picture is worthy of a thousand words (more of less). In composing a photo, if I can create an image that suggests its own story to my viewer, and allows them to engage their imagination in a dance with my vision, I have attained and created a moment of worth. There are some photos that might otherwise appear as a snapshot of a moment, whereas in reality, a story deserves to be told. Allow me to share such a moment in time now.

I made this photograph of a raven and bear not for the aesthetics, or the compositional considerations. I would not expect this photo to catch anybody’s eye or much of their interest on its own merits. It is, in short, a snapshot. I made it to record a story that was unfolding before my eyes at the time, and that had my full attention. 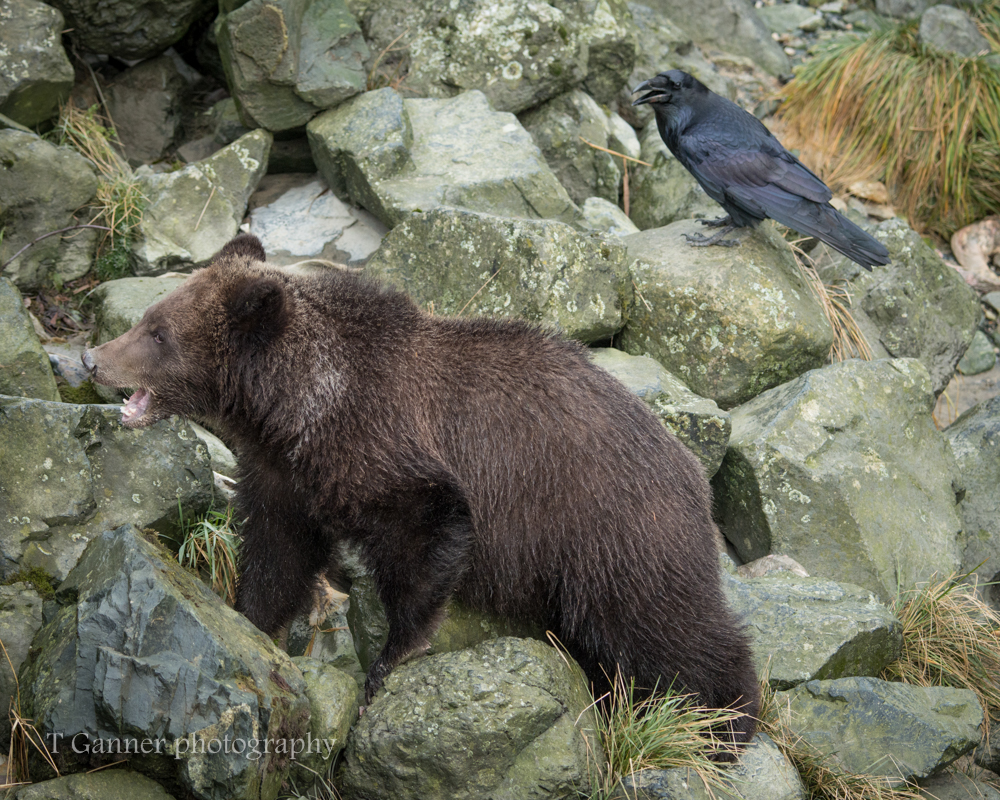 According to Tlingit tradition, the Raven has great knowledge, and can effect transformations and create new realities as he chooses. Raven is a messenger. “If Raven appears … you are about to experience a change in consciousness. Raven is the messenger that carries all energy flows of ceremonial magic between the ceremony itself and the intended destination.” (http://www.sacredwicca.com/animal-correspondences ). Raven is a vocal creature. According to allaboutbirds.com, scientists have placed their vocalizations into as many as 33 different categories based on sound and context. I have heard citations of 40 different vocalizations here in Alaska. It has been my direct observation that the Raven in Alaska speaks a different dialect than those in the Grand Canyon of Arizona. (There are eight known subspecies with little variation in appearance—although recent research has demonstrated significant genetic differences among populations from various regions. Ref: https://www.beautyofbirds.com/commonravens.html ) 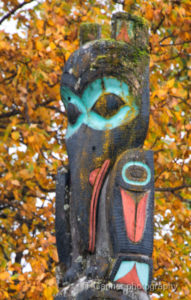 In Alaska and the Pacific Northwest, Raven is easily differentiated from Eagle on totem poles and screens by virtue of the fact that Raven has ears. He is so vocal, and so articulate, he needs the ears to hear, I suppose, though like many people I know, they seem to be better at talking than listening. On the other hand, I know little of what the Raven hears. Bottom line and important fact: they definitely communicate.

Mostly I hear Raven pronouncing through squawks, croaks, and gurgling. They are often loud in their announcements and pronouncements. On this day, I saw something I had not seen before. This yearling brown bear cub was searching through the rocks below the bridge where my wife and I stood watching. It was an advantageous perch. As he poked around, Raven landed near, above, and slightly behind the bear … on his shoulder, so to speak. For twenty minutes this Raven “whispered” to the bear.  Vocalizations appeared to be soft, relatively quiet, and thoughtful as Raven composed a continuous string of communications. The bear went about his business, seemingly un-distracted. The Raven kept his attention squarely upon the bear. What was being communicated, I know not. My anthropomorphic imagination wants to believe that Raven was imparting some wisdom to the young bear. I am reasonably sure, having watched this, that inter-species communication does take place, and it may be carried in some information-laden carrier signal through sound waves that is conveyed through some receptor beyond the understanding of our linear and analytically constrained brain. Much of our understanding of inter-species communication centers on our trying to make ourselves understood to other mammals and primates or playing Beethoven to our house plants. Who is to say how those beyond our realm of understanding share their knowledge. A good topic for a rabbit hole. 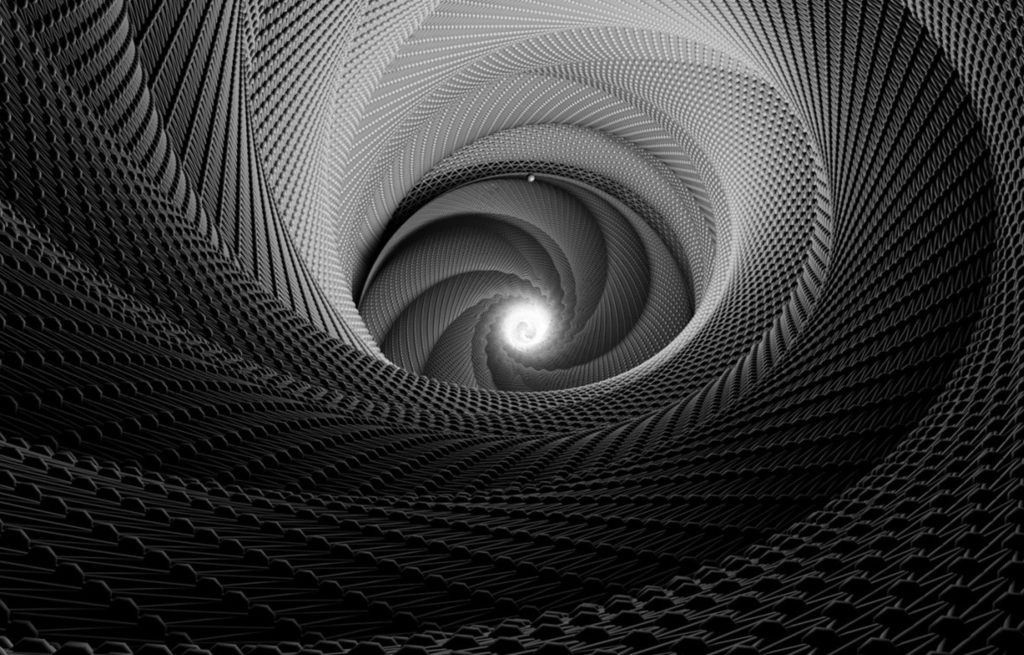 P.S. Along the way, I found an interesting page wherein the writer shares his own experience of inter-species communication with a Raven. For your interest and amusement: http://www.interspecies.com/pages/RAVENS.html

If you are interested in exploring Alaska with me, perhaps you would like to consider making Haines a destination and joining me for a private photography workshop. Best deal in town! Here is some of what I offer: PHOTOGRAPHY WORKSHOPS

Comments offered help to push this page out to others. Please consider leaving a comment if you are enjoying what you are reading. Cheers!