The Chilkoot River corridor faces difficult management issues addressing vehicle congestion and tourist safety as crowds visit Haines Alaska to view bears. Recently the Haines Tourism Advisory Board (TAB) convened to address the ongoing challenge of the issue of management in the Chilkoot River corridor.  Complaints written to the Haines Visitor Center about the situation in the corridor were shared and aired. The issue regards the overall congestion and behavior of tourists who come to view  the coastal brown bears during the salmon runs in the Chilkoot River, which is part of the Chilkoot State Park.

This has been an ongoing discussion for at least five years. A few measures have been introduced along the way towards mitigating the issue. The Haines Borough Assembly and the Chilkoot Bear Foundation have endorsed and/or provided funds to support bear monitors working with the State Park to help control the interaction between tourists and the resident bears along the Chilkoot River. In years past, two monitors have worked the corridor, though they keep regular working hours and are not present in the evening. This last year there has been one monitor only.

Bill Thomas who served Haines and community in the Alaska House of Representatives secured funding of upwards of one million dollars to provide for implementation of a management plan in the corridor that would include additional pull-outs and viewing platforms for the public to observe the bears in a safe and constrained manner. Approximately 40% of those funds have been spent in manners which have not served to address the implementation of any of the planned alternatives on the Chilkoot River.

The issues persists. The discussions continue.

Earlier this summer the Haines Borough Assembly sought to leverage the State Parks to implement a management plan for the Chilkoot River corridor by declaring a moratorium on issuing new tour permits to anyone wishing to include the Chilkoot River in their plan of operation. This measure was passed with the addendum that existing permit holders would not be able to transfer their permits in the event of the sale of their business. This was reasoned to motivate current permit holders to “get their skin in the game.”  Whether the State Park would welcome the involvement of local tour operators in its development of a local management plan might be a practical question. The jurisdiction of the local borough assembly within the state park is also beyond being just suspect. The state park issues its own operator permits.

There are two main management issues within the Chilkoot River corridor. One is vehicle congestion. The other is the un-managed interaction between tourists and resident bears. The borough assembly’s moratorium on issuing tour permits does not address either of these problems.

Eliminating the issuance of further permits does nothing toward addressing the current congestion problem which helped prompt the action in the first place. There are two main culprits in this dilemma. Several tour companies currently have carte blanche to run as many tour vehicles as they want at any given time in the corridor.  Many of these vehicles are large to medium sized buses. If they pull over and exit their passengers, upwards toward a hundred people could suddenly crowd the roadway and banks of the river.

The other culprit is the individual tourist vehicle. I have seen people park their vehicle in a traffic lane without any consideration toward parking off the road, and go down to the river to fish. At other times tourists who spot a bear will stop in the road to man their phone cameras, thus creating a bottleneck at best. At times I have seen traffic come to a complete standstill while cars travelling in either direction stop to view the bears, oblivious to the fact that traffic has now come to a dead halt.  As a volunteer on the road one of my frequent tasks is to advise people to step to the side of the road so that vehicular traffic can proceed. Everyone seems oblivious when there is a bear to watch. I do not even trust the drivers to be watching out for the pedestrians. I often think bears are not the biggest danger in this country. 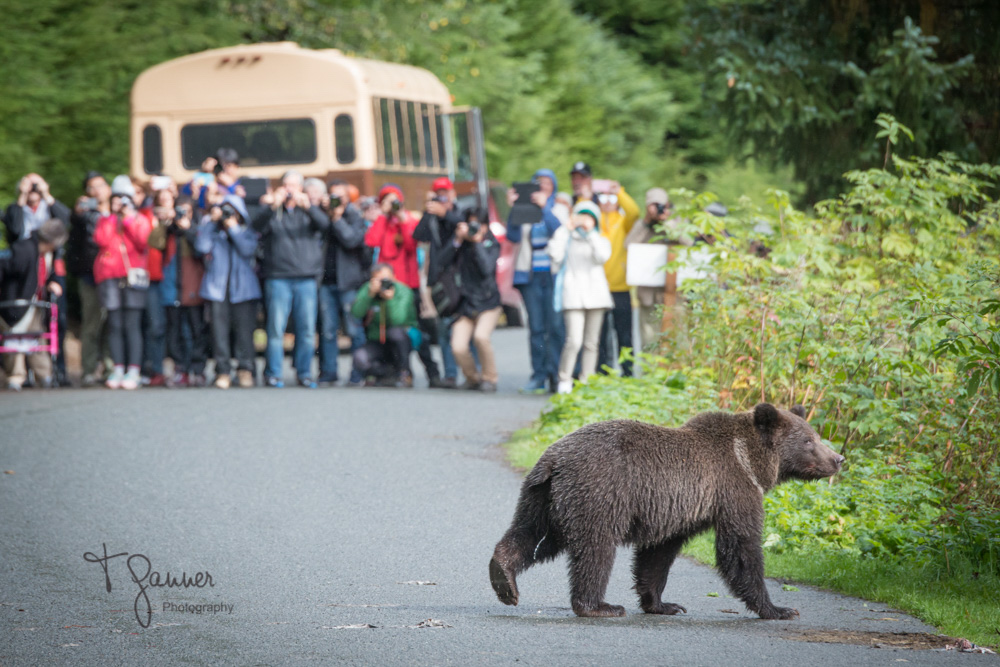 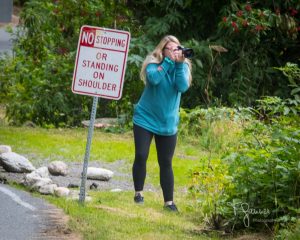 The other management issue involves the interaction between people and the resident bears and this has nothing to do with the tour companies. The issue lies with the independent travelers. With a few exceptions, the tour companies make a significant contribution to the management of people in the corridor. As Alaska DNR-trained guides manage their own groups, independent travelers are brought into line as well. Problems are more likely to arise when the guided tours are not present and un-permitted groups and other independent travelers roam the Chilkoot River corridor during the off hours. These are times when the guides and monitors have retired for the day. Without regard to posted regulations and restrictions I have repeatedly seen what amounts to a mob-mentality drive ill-considered behavior which puts ADF&G personnel in danger, themselves in danger, and ultimately the bears in danger. 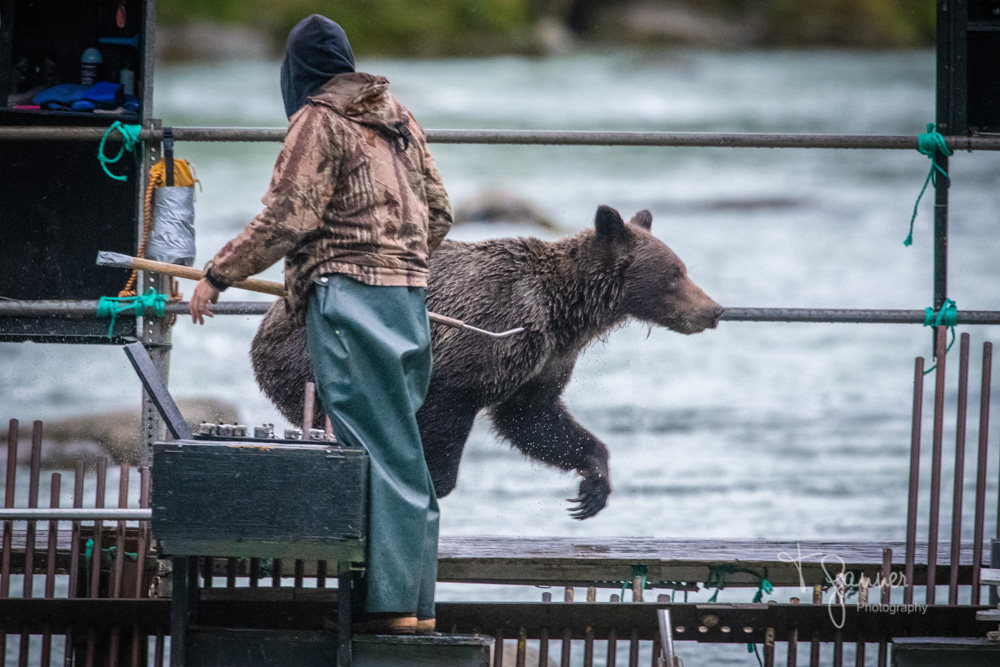 What are the answers? Is there a solution? We have spent years debating the best way to proceed. Hours are spent in assembly chambers in thoughtful discussion, everyone is agreed something needs to be done. The problem persists.

Some people do not practice common sense when given the opportunity to show discretion to wildlife.

It is my personal belief that there are a few alternatives that may help the situation.

This issue would be well served by being addressed sooner than later. (Too late already?) Currently there are approximately five brown bear sows with new cubs who are frequenting the Chilkoot River in search of their sustenance. Two summers from now those sows will force their cubs out of the den and onto their own lives. The Chilkoot River corridor will be the home to a great number of sub-adult bears who will be confused and anxious about their place in the world. To date their has been no dire interaction between bruin and man. Many maintain it is a crisis waiting to happen. It would be a good time to move beyond our debates and discussions and develop a plan that protects both visitor and residents. 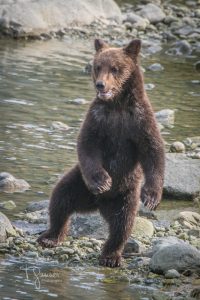 This is the third of an ongoing series on the bears of the Chilkoot River. You can read the first installment at: Chilkoot River Bears

The second installment is at: The Chilkoot River Saga Continues

10/23 update: Since writing this blog, the Alaska Department of Natural Resources (State Parks) has received a $1.5 million (approximately) federal grant to add to their fund for improvements in the Chilkoot River corridor. Superintendent Preston Kroes met with the Tourism Advisory Bureau and advised that work would begin on improvement in 2019. Given the extra funds received, the DNR is reevaluating its objectives for an improved road and facilities. Much is being discussed, all TBA.

Meanwhile, I have some documents to share that might be of interest. These include documents shared at the recent Tourism Advisory Board meeting of 10/23 that reviewed the short term and long term goals as part of a Master Development Plan, and a document detailing concerns, questions, and suggestions made to DNR with their responses: 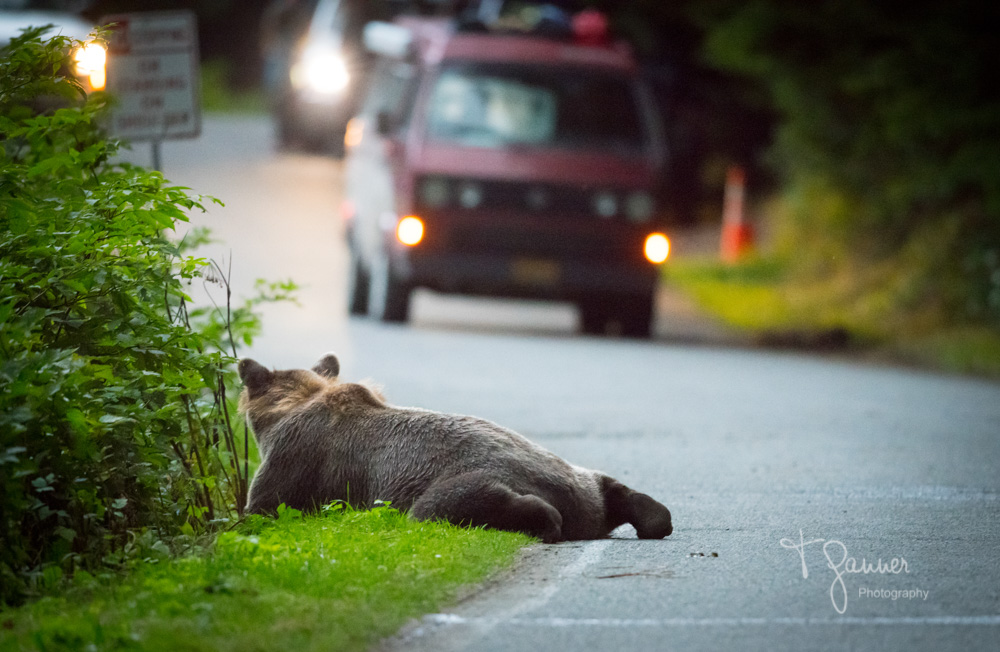 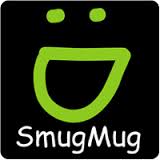 I have devoted a gallery to the bears of Haines and Alaska on my Smug Mug Gallery for Bears/Wild Things.