Since writing the chapter on The Bermuda Grass Triangle, and the myth of the “murder cabin,” I have done a bit of research into the background of the Red Braden Cabin that may be worth sharing.  The information I share here comes from conversations with several people who personally knew Red Braden and his wife Delores, aka “Del.” 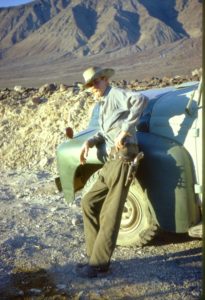 To say that Red Braden was a colorful character would be an understatement. He had many mining claims throughout the valley and several mill sites in addition to his cabin. The name of his mill site above Upper Warm Springs is not known. Why he chose the location for this cabin is not known. It is located in a large wash approximately one mile above Upper Warm Springs. There is no water source here.  Any water found here is often catastrophic, being the result of rain that often translates into flash floods. Such floods are slowly eroding the ground around the cabin, which appears to be living on borrowed time. There is a sizable forge nearby, but no wood to feed the flames he used to process his ore of mercury.

Red Braden was not known as being much of a builder. His cabin was originally located with other structures in Marble Canyon, on the Waucoba-Saline Road of the north pass into Saline Valley.  He dissembled the cabin and transported it into Saline Valley and reassembled the 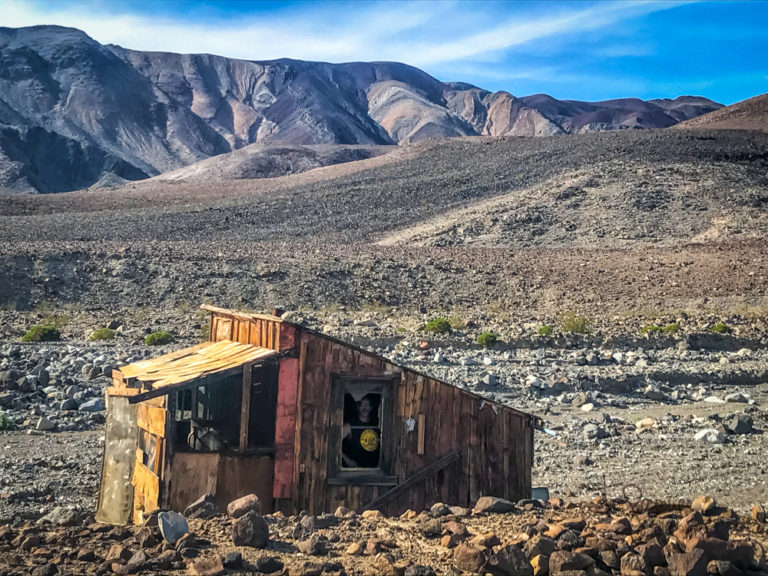 structure above Upper Warm Springs. Despite the cabin’s apparent isolation from anything useful, it was presumably near to his cinnabar claim, registered as the Cerro Albino. Cinnabar is a mercury-bearing ore, which is red in color and rather dense, though a local miner tells me it weathers to black where it is exposed to the air. Mercury was of great interest to prospectors during the 1960’s because its price was similar to the price of silver. The Cerro Albino claim is located near the white tuffacious (volcanic ash) canyon ten miles beyond Upper Warm Springs toward Steel Pass. This canyon is popularly known as “Petroglyph Canyon” or the ‘birthing canyon.” I recently went up to his Cerro Albino claim to look for diggings and found little in the way of evidence of significant historical mining. I asked a local “old-timer” prospector who knew Red Braden and is familiar with the area about the Cerro Albino claim. This gentleman told me that any prospector worth his salt and familiar with the country would know exactly where any given rock or sample would come from. The samples that Red shared came from the Dry Mountain area, and not Cerro Albino. 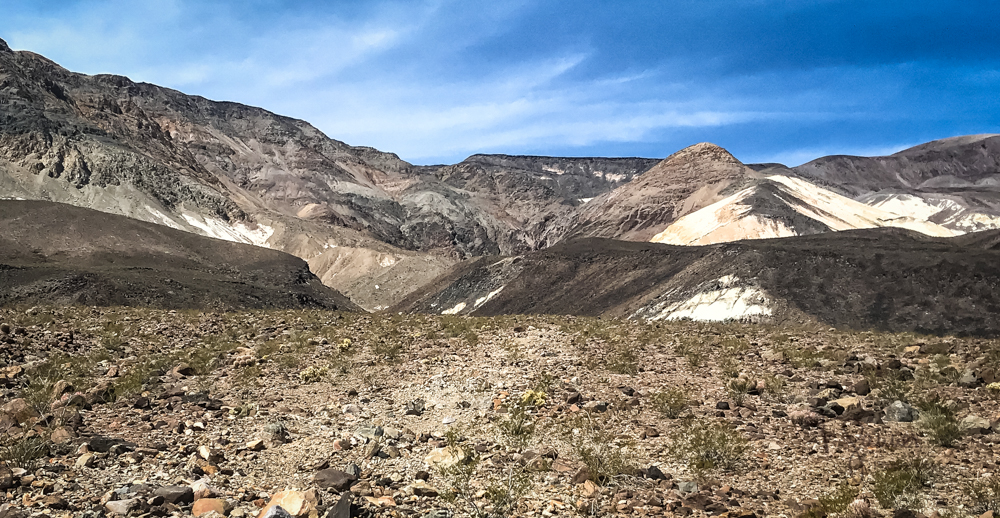 Another old-time resident of the valley shared some information about Red, as well as another serious Saline prospector by the name of Joe Ostringer. Joe had many claims throughout the valley, and at one time held a claim at the Lower Warm Springs. Apparently, there was a lot of claim jumping going on back in the day. Joe’s claim at the Lower Springs was jumped by Lucky Rich. Other claim jumpings were not so friendly perhaps. It seems Red would jump Joe’s claims and Joe would jump Red’s claims. An old-time resident of the spring told me she went up with both Joe and Red to see their mercury claims at different times, and it was the same claim. Red was a pistol-packing prospector, and at one point was quite ready to square off with Joe at the Lower Warm Springs.  Red drew his gun on Joe. Lucky Rich tackled Red and another tackled Joe to keep them from coming to some serious blows.

My understanding is that Red was usually packing a sidearm. He hired a local resident in the valley by the name of Del Heater as a caretaker to the mill site to help him ward off the claim jumpers. Del Heater also carried a sidearm toward that end. Red showed him the bullets in the side of his truck as evidence of the dangers he faced. Heater eventually concluded that Red had, in fact, put those bullet holes into his truck himself. Regardless, it was a good job, Del Heater was an excellent mechanic and engineer, and was essential to Red to keep his equipment up and running. According to a friend, Del would hear Red listening to recordings of shootouts in the evening hours while camp was otherwise peaceful and quiet.

I have heard another account from several sources that Red used to carry an Inyo County Sheriff’s badge in his pocket, which he would somehow inadeptly drop on the ground when speaking with someone new. Red made sure the other party saw it as he picked it up. Eventually this behavior was reported to the Inyo County Sheriff, who made Red give up the badge. 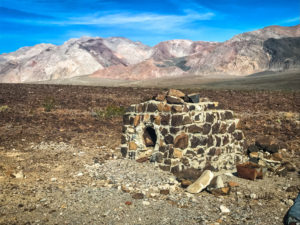 The base of the forge still stands

There are the remains of a rather large forge near the cabin. He presumably processed his ore in this forge. The popular story has been that Red boiled his mercury down inside his cabin while he slept, and that was responsible for his erratic behavior and ultimate demise by cancer. The local prospector I spoke with disagrees with this myth, insisting that Red was never that foolish. Indeed, Red did die of cancer in 1977, and he was as quirky as any sunbaked scrabble-scratching desert rat might be, but it is likely that the causes were other than mercury poisoning. (My understanding is that Red had an oral cancer.) Where did the fuel for the furnace come from? First hand reports are that he brought in a lot of firewood, and propane. Firewood used to be abundant in the washes lining the road coming into the valley, which will be the subject of a future chapter of the Chronicles.

And where did Red get his water? I found a 35-gallon barrel with a hose bib in his dump, and first-hand information is that he stopped at the Warm Springs for a fill-up, of course. On rare occasion he even indulged in a bath, and I am told at such times he was a man in dire need. 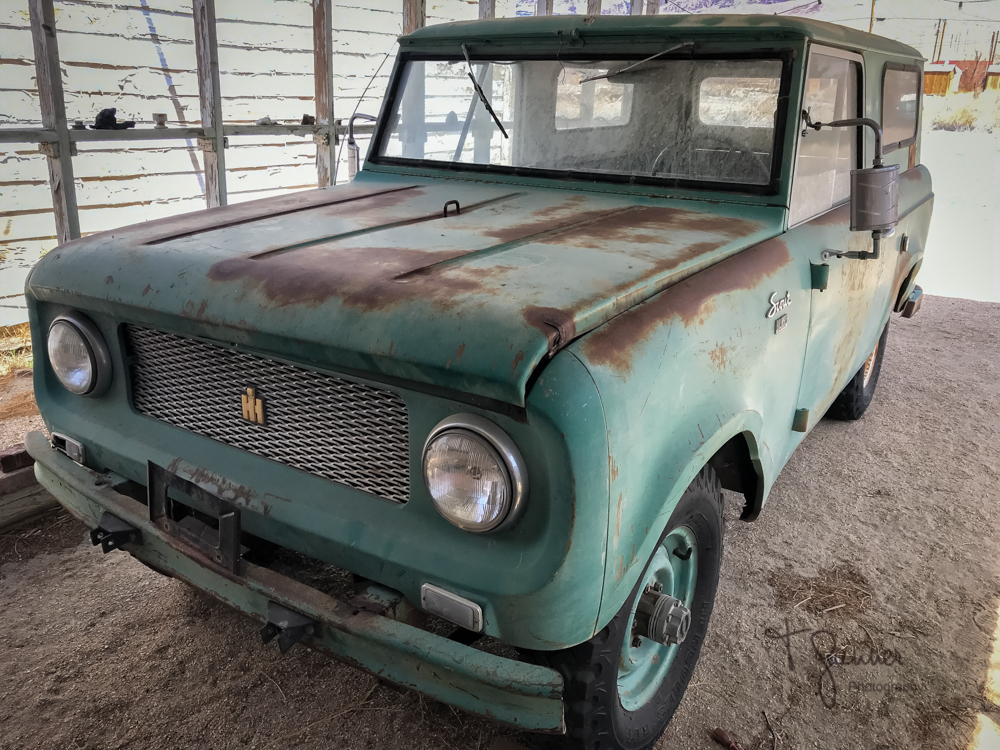 Del Braden’s International has found a home in Keeler, CA 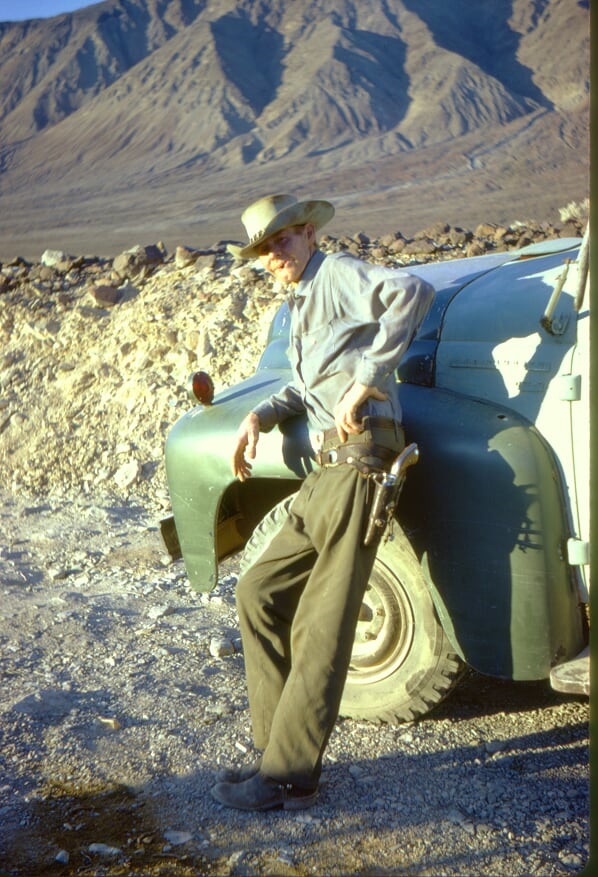 (Historical contributions and insights are thankfully received and acknowledged from Sam, Alan Akin, and Kathy Davis.) 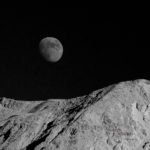