The story of the  Saline Valley outhouses at the Lower Warm Springs  is what got me into writing the Saline Chronicles. I was sitting around the lower campfire admiring all the new faces when I was compelled to ask if Channel 12 meant anything to anyone. No, it did not. I proceeded to launch into a little narrative about CB radios and outhouses, and the folks around the fire started encouraging me to “write the book” that I have often been chided to transcribe. The heritage and lore needed to be shared. As I have said before, I have long been encouraged to “write the book” and my reaction has been, ”I remember laughing a lot but I am not sure how much I actually remember.” Aside from my historic reservations, I decided that in my retirement years I would make the attempt to whittle away at the memories that remain, and hope that others will chime in and add their stories to Saline Noir. I am still waiting upon the later. Anyway…

Communication in the Valley

Back in the day, the valley was a bit more populated. Turtle Jim lived at Willow Creek caretaking the talc mines’ mill site. Hard Rock lived at Bunker Hill on the North Pass. Mammoth Bob might be up at the Emma Mine. Double M was over in Hunter Canyon. Glen and Alan (the Lonesome Miner) were at Morning Sun, though they did not have a CB. Glen and Sherry lived in Paiute Canyon. Dorci and Jackass Andy lived at Beveridge Canyon. And then there was everyone at the springs. The way we communicated across the distances was on Channel 12 of the CB radio bands. It was pretty much a party line. Cell phones had not been invented yet and there was certainly no conventional phone service. (In time due to necessities I installed a VHF-FM radio service that tied into an autopatch that connected with Ma Bell at the rate of about $1/minute.) There were signs posted on both north and south pass that indicated Ch 12 was in use, should anyone need to call in for help or just announce their arrival. Big Al had a ham radio set-up at the springs and would DX around the world on 10 meters, but the average visitor to the springs just came equipped with a CB is they were regular visitors and in the know. Before the installation of radio equipment that would reach out to the Inyo County Sheriff, emergency contact went over the Inyo Mountains to contacts in Big Pine or Keeler. Lucky Rich had connection with Caboose in Big Pine. I would touch base with Death Valley 202 in Keeler. One night for entertainment we patched out to a friend in Boston from my trailer at the Lower Warm Springs via our Keeler Connection. Death Valley 202 had the landline connection and keyed his mic to the receiver to bridge the continent into our hovel.

The Saline Valley Outhouses had names

And what does all this have to do with the Saline Valley outhouses? Prior to the Park’s installation of the vault toilets camp relied upon hand dug outhouses for sanitation. The original outhouse was located where the double-seater vault on the north side of camp is located. The road that goes past the front of this vault was originally the original air strip at the Lower Warm Springs. And of course, the original outhouse was given the name “Channel 9” as it was 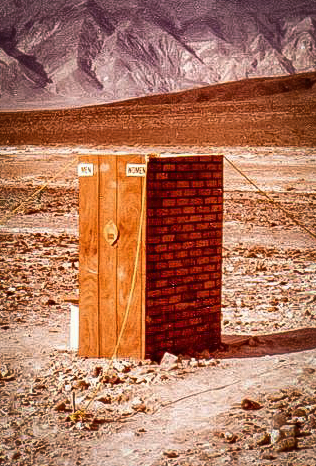 designed for emergency purposes. (I suspect some of our younger readers might not understand that Channel 9 was the designated emergency channel on the CB band … now you know). Over the course of time, holes would fill up and new outhouses had to be installed. Rather than move the old house, a new outhouse often arrived courtesy of a local contractor by the name of Johnny Tequila. He is also the gent responsible for the picnic tables that are still used at the Lower Warm Springs today. With each iteration, the outhouse was graduated to the next higher channel. One of my favorite iterations was a single-seater with a brick-veneer linoleum siding. The proverbial brick shithouse. The final iteration was a double seater. It was marked Ch 14 on the back wall. It came equipped with seat belts. These might have been designed to assure safety in earthquake country or may have been an anticipated necessity after one of Chili Bob’s chili dinners. There was a classic flush handle behind the seats that was attached via a cord to a bell outside. When one was finished, they could “flush” and alert the line that the unit was free for use. Back in those days there was rarely a queue for the loo. There was a corncob framed into the side of the outhouse and behind a piece of plexiglass with a sign reading: “Break glass in case of emergency.” In a stroke of genius, each roll of paper had a small block of wood hinged above it so that the wood would rest on the roll and keep the wind from unraveling the paper. This was a good idea as the house had no door, providing the best view that any privy ever enjoyed. 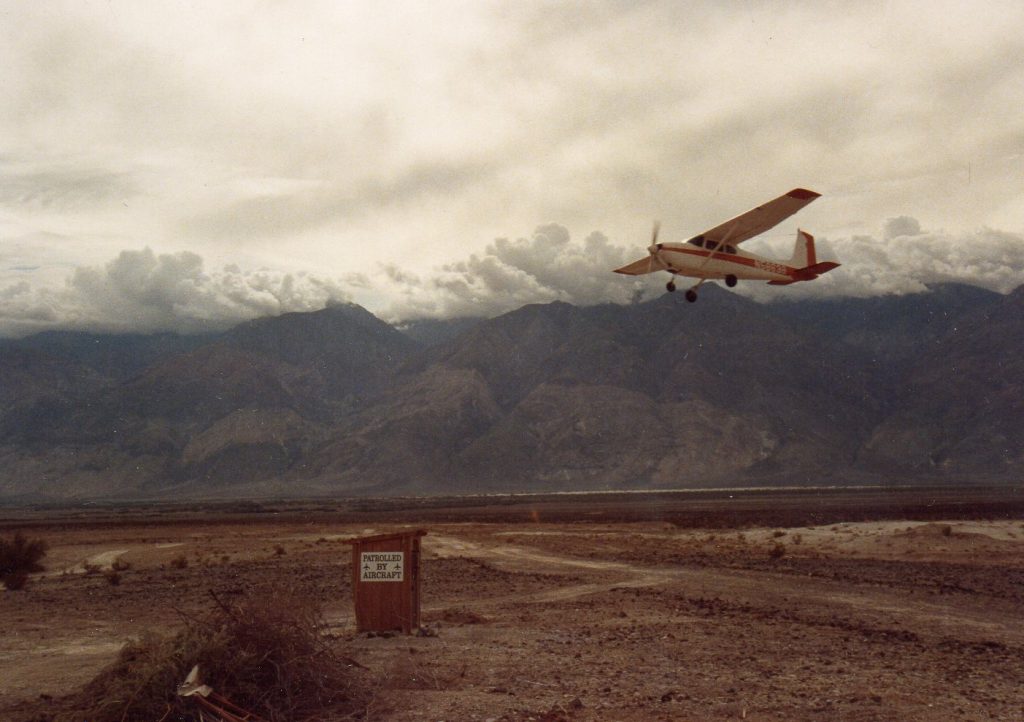 Standard items to bring to camp were bleach, toilet paper, and lime. The lime was to toss down the hole after each use. It turns out that quick lime does nothing to aid in the breakdown of fecal waste out in the desert.  In fact, it may be counter productive in that regard. I did see an advantage nonetheless. If a fly landed on my sandwich, and it was wearing white sneakers, I knew where that fly had been, and I knew to toss the sandwich out.

As camp grew, a second outhouse was delivered and installed on the south side of camp where the current single-seat vault is located. This treasure was crafted and delivered by Gordon and Cake Lady. This too was a double-seater but came with a swinging bar-style double door. On the backside of the house one side was labeled “Jacks” and the other side was labeled “Jennys” though there was certainly no partition separating the two halves. This unit got moved around a lot. The soil at the springs is primarily calcium carbonate as a result of the migration of the hot springs over thousands of years. About five feet down from the surface on this mound we would hit hardpan, which is a rather impenetrable cemented layer.  As such, the hole would often fill up within a season of use. When someone came to camp and asked if they could help, I would be happy to point them to the knoll and suggest a new hole. It was a great way to test the sincerity of the offer. I also knew where the old holes were buried and where NOT to dig. I felt I had job security.

One summer I came up with a revolutionary idea that might save us a lot of time and effort. Why not burn off the contents of the hole? When everyone left at Memorial Day (generally the end of the visitor season and the beginning of the quiet time) I got some volunteers to help knock the outhouse over on its back. I would let the hole dry out and then burn it off in early October before Columbus Day when we would start having regular visitors again. That should effectively reduce the volume to a pile of ash and preclude the need to dig a new hole. Over the course of the summer the occasional visitor would question about the outhouse that was laying on its backside (redundant?). I had fun with a variety of responses. “Quite a wind one night’; “You should have seen the look on the fellow’s face after the wind blew him over”; “Chili Bob’s chili hit a new record”; “World’s biggest fart.” When October rolled along, the contents looked to be completely dried. I poured five gallons of diesel into the hole and tossed a match at it. This made a great photo: the outhouse on its back with big flames coming out of the hole. I wish I could find that negative and share it. I did post the photo inside the house, and that generated a lot of fun future conversations. The reality of the situation led to an unexpected and unwanted result. This might be referred to as a learning opportunity. What happened over the course of the summer months was that the first six inches of the pile dried out. This formed a cap over the lower reaches and effectively insulated the remainder of the contents. Those top six inches burned for about an hour, and the lower reaches with all that paper product mixed in smoldered for about two weeks. The prevailing winds from the south blew the smoke from the smoldering pit right at my camp. The moral of the story: Shit Happens, but it rarely un-happens. 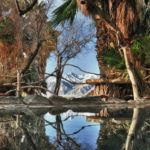 A note from Oregon John about the upper springs outhouse: there was the practice of hanging you hat while you did your business. It signified that it was occupied. invariably someone would leave and forget to grab their hat, shoulda seen all the antsy campers. 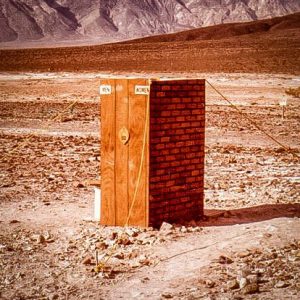