Day of the Moose | Haines AK 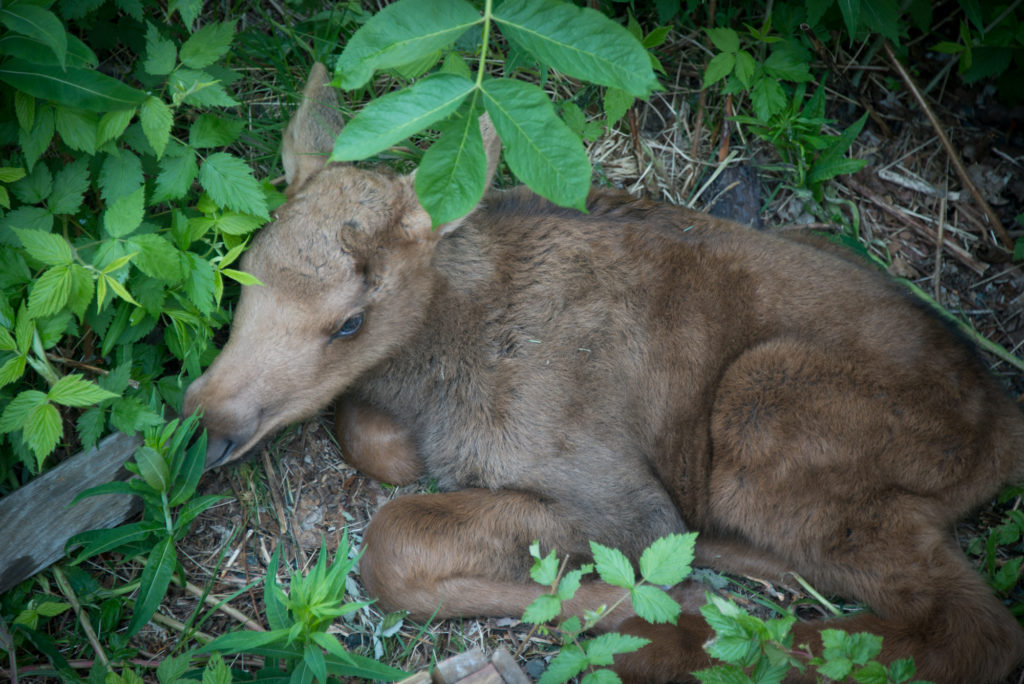 The day began simply enough. The game plan was to take a hike through Chilkat State Park to a wonderful little spot by the name of Moose Meadows. As I was preparing, I heard a chirping from my bedroom window unlike any “song” I had heard before, and I was not sure if it was being rendered by a bird or some other critter. Along with the chirping came the squawk and ranting of a raven. Shortly after, my friend Ariella came into the house proclaiming there was a baby moose beneath our rear deck. (The deck is well elevated above the ground, being on the floor above a daylight basement). Well to be sure, it was a darling of a pygmy size, apparently just a few days old, and tenuously stepping about with little asurity on relatively new and spindly legs.I warned everyone to stay up on the deck as I was sure that mother was near by. We watched as the little darling poked around and eventually settled into laying amidst a bed of fireweed. 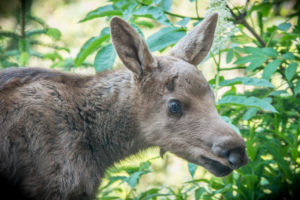 Treasured moments of wonder passed into an hour and beyond, with no sign of mother. The calf continued to rest, though I sensed the breathing was more pant than breath. Another hour passed with little sign of energy from the calf, and no sign of the mother. At this point, I started to make some phone calls. I called the local Division of Wildlife and found myself connected to the State Trooper’s office. Explaining the scenario, the dispatcher advised I let nature take its course, because the only thing the trooper would do would be to come and shoot the calf. Not an option in my opinion. I made a call up to Steve Kroschel, who runs the Kroshel Wildlife Center up the highway. Steve was excited to hear what was taking place. As I suspected, the calf needed nothing but mother’s milk, and we should not try to give the calf any water. Steve also referred me to the Juneau office of the Department of Fish and Game, and gave me the name of the right person to talk to, who would issue a permit for the adoption of the calf by Steve’s Center should the calf be determined to be an orphan. Voice mail. The hike to Moose Meadows has been officially preempted in deference to moose, and there was no way I was going to leave this little one unattended. 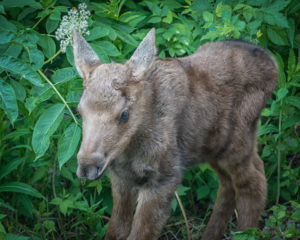 Hours passed, the calf remained sedate. The phone rang, and a delegate from the AKDFG (Alaska Department of Fish & Game) returned my call to hear about what was going on. We conferred, and agreed to an active program of hurry up and wait. I advised the delegate to talk to his supervisor about Steve’s suggestion of adoption permits should the necessity arise, and those wheels were put into motion. Watchful waiting continued. Eventually the sun passed the deck, and shone upon the calf, whose breathing became increasingly short and rapid. Our friend was obviously warming up in a way that is not healthy for wild wood critters. He stood up unsteadily, and it was apparent that he could not manage turning around to find a new spot, and was stymied by the sharp drop off from the wall just beyond its bed. (The house is built upon a hillside, and his bed was at the edge of a rather tall retaining wall comprised of large boulders). The calf once again lay down, and with alarm we saw it roll off the side of the wall, and tumble below. I remember when I was young, how well I bounced, being of flexible frame, and I was relieved to see our little calf did not suffer any injury from the tumble. He picked himself up and slowly ambled off to a nearby bed of moss under canopies of spruce and hemlock. 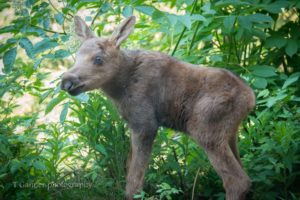 Fish and Game called back, asking for an update, and informed me the decision had been made to wait until the next day to issue any permits in the hope that the mother would collect the calf. After another hour, Steve called for a progress report, and agreed with the wisdom decreed by the Juneau office, and hoped the calf would survive the night if not rescued by mom. He made the suggestion that I get a video camera on the scene to document anything that might happen while we might not be looking. (Hate to say, the possibility of a bear coming along and making the final decisions was a possibility). I am glad Steve made the suggestion, and I now offer a set of brief clips which show our calf sleeping beneath its canopy, some of its plaintive cries to mother, and the joyful reunion when the mother finally appeared upon the hillside at about 9 p.m. to collect junior. It was certainly the Day of the Moose, and I was happy to keep a waitful watch over our charge for almost eleven hours.

An interesting article offered by the State of Alaska Department of Fish and Game on the unlikelihood of moose calves being orphaned came to me in the wake of our little adventure. Apparently this is not an uncommon occurrence among ungulates. READ THE ARTICLE.

For a full resolution rendition of this blog, including a five-minute video clip of our little charge and his reunion with Mom, please visit my Smug Mug site for Day of the Moose