Surf Scoters have come to be one of my very favorite birds and visits us seasonally in Haines, Alaska. I have come to embrace the appearance of the surf scoters in April as one of the keystone harbingers of the spring season. In doing some background research for this blog I visited several reputable ornithology websites, and was disappointed to find the reading to be rather lacking in the color or spirit of this unusual and intriguing member of the duck family. In fact, my iBird Pro app (5 stars for this app) asserts the surf scoters are among the least studied of northern waterfowl. I feel compelled to celebrate this comical character. This whimsical buoyant clown deserves some description as interesting and colorful as his profile and sound tracks.   To that end, I will get the dull details out of the way in favor of something more deserving to the little chortler.

In scientific parlance, the surf scoter’s genus and species is Melanitta perspicillata.   The genus name is derived from the Ancient Greek melas meaning “black” and netta meaning “duck”. The species name is from the Latin perspicillatus, meaning “spectacled”, in turn derived from perspicere, “to see through”. (Wikipedia) 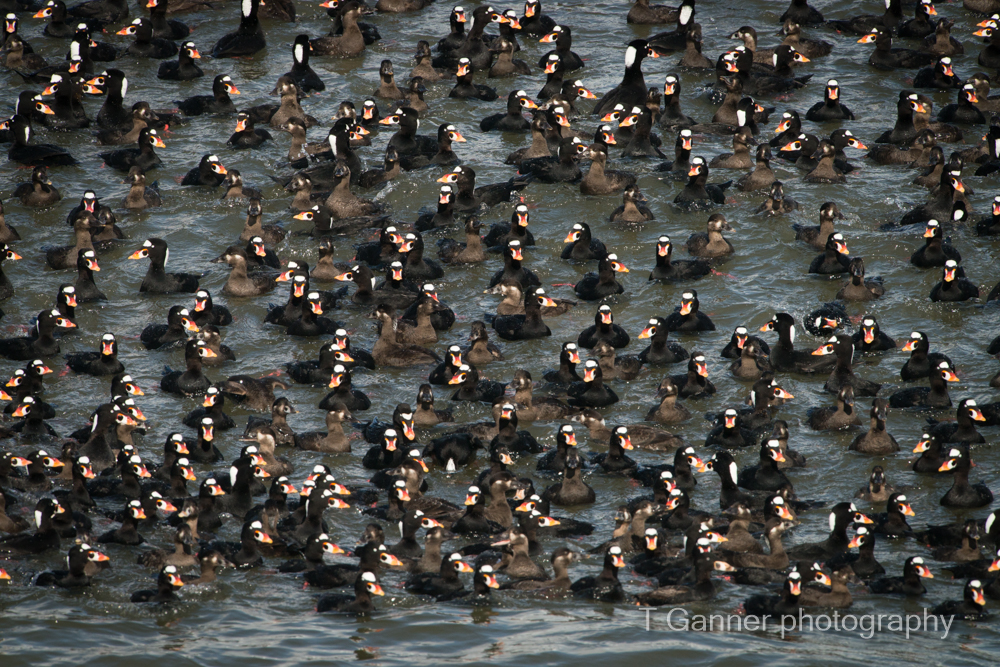 The surf scoter is a black-and-white seaduck common on the Pacific and Atlantic coasts in winter. The scoter has a boldly patterned head that is the basis for its colloquial name “skunk-headed coot.” They range from California to Alaska, and breed in Alaska and across northern Canada primarily on lakes.

Up here in Alaska (or at least in Haines) we refer to surf scoters as the “poor man’s puffin” as there are no puffins in the area, and the nearest opportunity would be a trip to Glacier Bay, which is a trip for the somewhat-affluent traveler. Their size and markings may lead some to easily believe they are a puffin, but they are indeed the surf scoter. 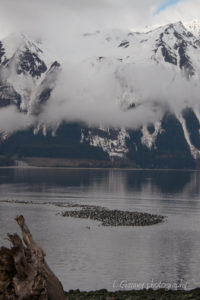 The first time I saw surf scoters they must have numbered into the thousands. I was sitting on my deck over the Chilkat Inlet (a two-mile wide fjord) comfortably immersed in my hot tub with the wife, when we noticed what appeared to be some sort of slick on the water extending several hundred yards off into the distance. What sort of an ecological catastrophe was upon us? As we craned and squinted, lo and behold, and be duck-goned (as opposed to dog-goned) them’s a lot of birds out there! And what’s up with that? Not much will get me out of my tub (I have spent a fair portion of my life getting into hot water, and I have come to be comfortable there thank you very much!) but this new phenomenon demanded my attention, and perhaps just maybe I should take my camera along as I descended to the rocky beach below to have a closer look at this approaching rendezvous of watery fowl. I observed (for my first time) a behavior typical to the surf scoter that has since always delighted me and given me reason to pause and observe and share with guests. There appears to be a collective consciousness within the clan and a direction of purpose shared by the group mentality. The raft of hundreds to thousands of these ducks forms a relatively narrow line-up and approaches the shore in the fashion of a conveyor belt. Then, the leading edge of the wide ribbon of scoters springs slightly forward, heads down, wings slightly out, and tails up and dives beneath the surface, as the conveyor continues to move forward as the leading edge continues to dive after their brethren. And so this continues at a steady pace. I found myself questioning the tenant of the Conservation of Mass as the raft continued to dwindle while moving forward.

After a seemingly inordinate length of time, up they come, breaking the surface again in great numbers, all in relative proximity to each other. The first time one sees this occurrence, it is amazing. In fact, it still amazes, delights, and amuses me. What they are doing is diving for crustaceans and mollusks. According to Audubon, they may also feed on aquatic insects, small fishes, echinoderms, marine worms, and seaweed.

On this initial occasion I was rather amazed that I was able to “approach” these skittish ducks on that rocky shore. They seem to be a rather shy critter, overall. Many has been the time I have seen them near the shore on some large inlet, and I have pulled my car over to observe and photograph their antics, well removed and high above from their location, along the road as they swam in the distance. More often than not, they will turn their tails to my intrusion and head off in some other direction. It takes very little to set off the flock, be it a human observer or perhaps some seal poking around beneath the armada. If one scoter decides it is time to move and takes flight, the effort will create a domino effect and incite a riot of frenzied flight with wings thrashing on the water and cries of protestation and panic arising as they fan out in an arc of exodus. 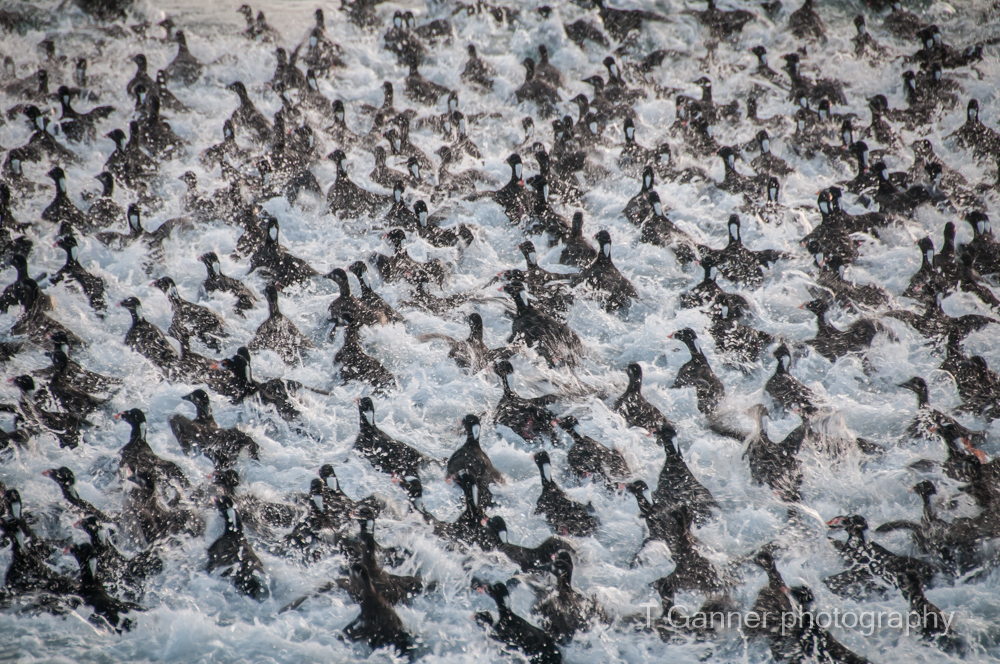 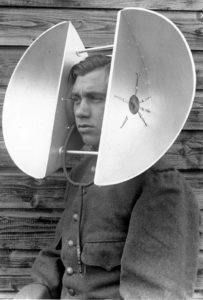 If one listens closely, you can hear an incessant chortling among these seaducks that reminds me of mono-syllabic Curly Joe. (I realize that some of my audience will have no idea what I am talking about in this instance, and bless those of you who do have a clue.) On a quiet day when the scoters are near the shore, this chorus rises easily to delight my ears and direct my attention to their preoccupations. On a windy day, one may have to don “elephant ears.” Just cup your hands behind your ears in the direction of the flock and you will be delighted to notice how clearly the sound comes in when you mimic a directional parabolic device. When they decide to go into panic mode and take flight, the chortle turns to a frenzied audio of beating wings, frothing water, and vocalized imperatives that border on hysterics (imagine Curly Joe ramped up to 78 rpm … there I go again). When the group takes flight, they fly very close to the water, and their wing tips dip to the surface with a tip-tapping that, when multiplied by hundreds of wings in similar purpose, will bring my attention to the brink of obsession with their water dance.

In calm weather on smooth seas, they are easy to observe as they go about their business. The incessant chortling, the winged tap dance upon the water, the ballet of aquatic acrobatics compel my attention, and give me cause to pause and spend time watching the easy purpose of a fully intentional community. Set to the waters of the Alaskan fjords, mountains rising in the near distance, this is an easy way to pass the time, watching the rafts form and disperse upon the water’s surface like a cross between an oil slick and a kaleidoscope, spreading and dispersing into tendrils, and then coalescing once again into a central mass, I am given to see this cycle as an almost cosmic dance that reflects the motions of the heavens beyond our vision, or reminiscent of a light show at the Fillmore (there I go dating myself again). 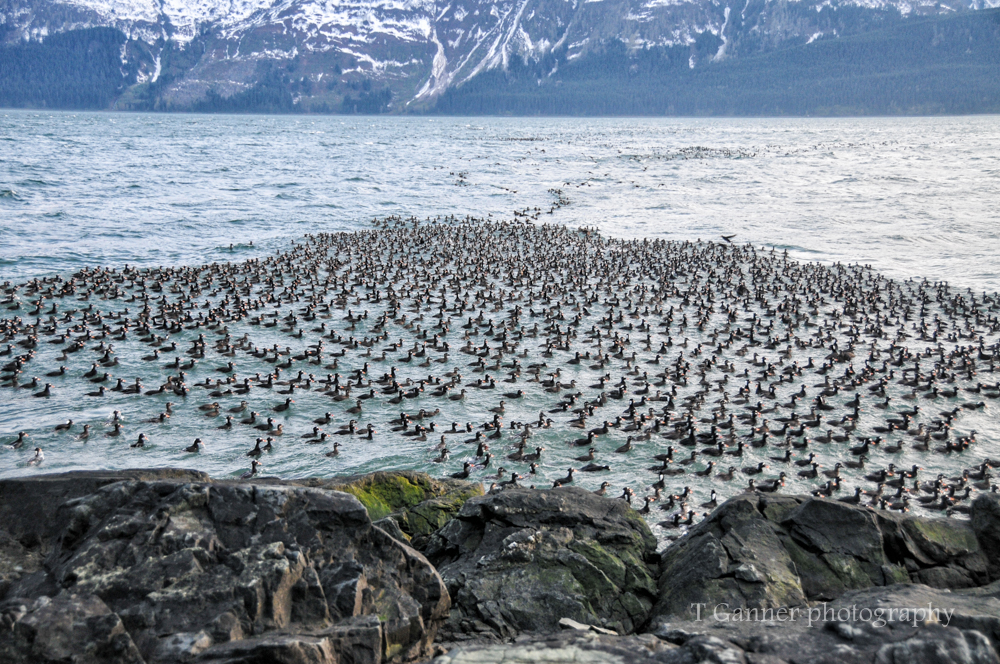 The appearance of these masses of Surf Scoters in Haines in the spring is a resting and feeding opportunity for this seaduck as they head north to their breeding grounds in the Interior lakes. It is with a delightful anticipation that as we act as a halfway house on their northern sojourn, so will we be treated to a return stop as they slowly move south in the autumn. They seem to be in no hurry, keeping time with a clock beyond our own reckoning. Their lack of concern with schedules is contagious as they draw me into their rhythms and captivate my attention for an interlude of calm and delight in what I might otherwise consider a busy day. There is always time for surf scoters.

For a bit of fun watching and hearing the antics of the surf scoters, click on the video icon/link for my mocumentary: “Scoter Madness” and please forgive my typo on the title page. Enjoy!